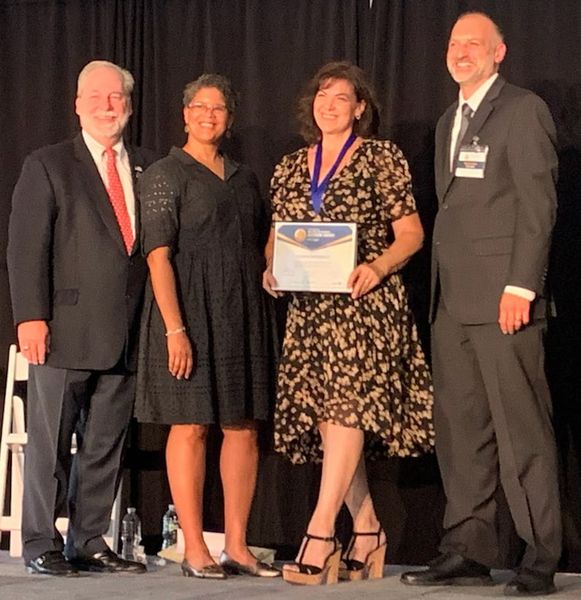 Our President has been awarded the state's highest volunteer honors, for her work in founding a local nonprofit to feed the hungry throughout the COVID pandemic.

Karen DeMarco, co-founder of The Food Brigade, received a medal as a top honoree of the New Jersey State Governor's Jefferson Award for Public Service, at a ceremony on September 12, 2021 at Grounds for Sculpture in Hamilton, New Jersey.
The award's origin traces back to 1972, when Jacqueline Kennedy Onassis, U.S. Senator Robert Taft Jr., and Samuel Beard founded the Jefferson Awards Foundation, to establish a prize for public and community service. It has been referred to as the "Nobel Prize for Public Service". The Jefferson Awards are given at both the national and state levels. Honorees of the New Jersey State Governor's Jefferson Award "achieve measurable community impact and represent outstanding acts of public service, without the expectation of recognition or compensation. Recipients demonstrate unique vision, dedication and tenacity of heroic proportion and serve as inspiration for others."
There were a total of 15 medals awarded to individuals across the state, plus 3 trophies given to organizations. DeMarco won top honors in the category of "Founders and Innovators".
DeMarco began her COVID relief efforts in the spring of last year, in response to the COVID pandemic and the resulting increase in food insecurity within our state. She started by personally cooking 1,800 meals in her Dumont kitchen for the sick, elderly, unemployed, and homeless. DeMarco soon expanded to food box distribution via contactless "drive through" operations, co-founding The Food Brigade in the fall of 2020. The extent of her organization's reach spread as she ultimately coordinated a cooperative network of roughly 30 other distribution partners to get food to those dealing with food insecurity - local pantries, women's shelters, churches, and other charitable groups and agencies. Between October 1, 2020 and July 1, 2021, The Food Brigade distributed over 2.3 million pounds of food for New Jersey residents in need.
"This acknowledgment is really a testament to our volunteers," said DeMarco. "None of the work of The Food Brigade would be possible without the time, efforts, and hearts of fellow New Jerseyans who support our mission. This Jefferson Award belongs to all of them as well."